Rather than soaring blank walls, the architecture is much more gallery-like with break out spaces, high transparency and voids as light-catchers. The upshot of integrated facilities simply increases the ground’s relevance beyond AFL to soccer, cricket and a vast array of community groups with access to unrivalled facilities.

The real light in which a stadium is held – and experienced – is determined by those qualities invested by clients, architects, engineers and the whole construction team. With an identity forged from intrinsic qualities rather than keen badging and branding, the new Brownlow Stand resonates with a job well done.

A parasol or origami-like roof seemingly as light and translucent as the wings of a paper aeroplane, floats above ground with seating for 40,000 and body of a highly legible structure.

Populous project architect Brayden Goodwin met with Vision’s Peter Hyatt to discuss the evolution of a stadium with a highlights reel all of its own:

VIRIDIAN There’s something theatrical about the big moment, the big event, the big entry and this stadium appears to build on that idea of how to build public expectation.

BRAYDEN GOODWIN The stadium angles to the actual park to create an intuitive entry point with a drama that occurs with the stadium’s folding shapes. The other main items we’ve tried to connect are having multiple viewing platforms. Seeing people arrive, meeting friends means people are able to enjoy a different stadium experience. There are different levels, and glass is used widely with the balconies that connect with those key spaces for the pre-game drama and theatre as everyone arrives.

How would you sum up the task at the outset?

Creating a new experience for the Geelong Football Club and the broader Geelong community. It needed to be a landmark building, a statement and a centrepiece for their business as a football club and also running a stadium. The major ingredients were permeability between the parkland setting and pitch, community and fan engagement. Permeability was one of the real drivers. Connecting the park with the actual pitch was really, really important and you’ll see that on level two particularly, in the social club bars, there’s a connection to the Geelong Cricket Club Oval and also the adjacent park.

Apart from funds, what did the client bring to this project?

We had a diverse client group of multiple stakeholders, with multiple needs. Working through all the different items to be achieved was really, really important – and complicated. We’ve got a 5,000 sq.m football department which sits underneath the stand with all the broadcasting facilities on the upper levels as well. How we incorporated the needs of the Kardinia Park Stadium Trust, the Geelong Football Club and Geelong Council as well as the State Government was integral to how this whole building works as one big core.

Globalisation and technology tends to deliver architecture and design off the same production line. Do you guard against, or embrace that?

What we’ve tried to achieve here is to embrace a generic approach for a portion of the building where that’s required. What’s really key in the buildings we design these days, is diversification. You need to have the diversification of offerings and that can be as simple as say, an outdoor area or a break-out space, which connects with the park, which provides some visual relief from the actual stadium itself.

And then there are those unique offerings…

We have the fan portal downstairs which is a glass floor of 45 sq.m. It overlooks the players’ warm up space. Being able to provide different experiences allows our clients to commercialise and monetise their buildings. That makes them obviously successful. From an architectural perspective, it makes them really interesting as well because we can provide tweaks and twists and changes throughout the entire building.

When you’re on a roll with stadia work around the world, how do you avoid slipping into a certain design comfort zone and produce simply more of what works?

I think innovation is why people come to us. We try to create new experiences with everything we do. I wouldn’t say it’s a case of one-upmanship but we certainly spread our knowledge really well globally. We buy into a lot of the ideas that have been created in the UK and the US. For instance the fan portal was actually an idea that came from the States overlooking car racing tracks. We knowledge shared with our people over there and realised that what maybe wasn’t right for that particular application had another application where that could work really well. We constantly try to understand why people come to stadia and try to create these unique experiences which can be regionally specific. So there’s a lot of community engagement with the Geelong area which we’ve tried to bring into this building. You’ll notice that with the café downstairs we can engage with the community and make club members and those in surrounding areas really engage with the actual building. Not just eight times a year when there’s a football match or a cricket match on, but the 365 days of the year so we can get commercial optimisation of the building.

Is there a highlight, or signature parts of the project that not only speak about the client but about your practice?

The main one was trying to create something that was completely different, uniquely Geelong. I think the Geelong community in general prides themselves on being uniquely Geelong. We basically took that brief to try and create something different. It was not your normal stadium. We’ve got function rooms, cafés and retail merchandise that come together to form a really cohesive, interesting experience.

A couple of generations ago this sort of ambitious glass usage would have been problematic – hot in summer, cold winter, but glass technology has really revolutionised how closeted space can be liberated.

A glass façade such as this is becoming more common in stadiums. You’re right, the technology in glass now allows us to do that. We did a whole series of engineering models to study the ESD and make sure we could get high performing glass that would allow good permeability and excellent viewing. Also from the playing pitch side, we wanted the glass as clear as possible. That ability to use performance glass and the technology that’s been developed for these types of facilities has been fantastic and a great outcome.

In the process of gaining the new you presumably risk losing something with the demise of the old?

We had to make some very fundamental decisions early on in terms of back of house areas. Where were all the loading areas going in order to not block this great view? That view from the old stand looking out towards the beautiful heritage cottage area, fantastic St. Mary’s, the park and the hills in the background. We don’t want to lose this. We don’t want to be putting all of our back of house area to this back section here. We want to be able to really celebrate that. But it did come as a bit of a trade off. We had to push all of our amenities and services down one end. Working with the design team on site and with the client group as well we’ve managed to overcome a lot of those issues through design.

Any glazing tricks or techniques you’ve used? Lessons learned along the way?

Lessons learnt from this project in terms of glass is to get your engineering models done early because they really do inform what happens with the rest of the building. Understanding what products are available, what visibility you’re trying to achieve. And in this particular situation one of our key drivers was trying to ensure the glass for the inner bowl is as clear as possible. We don’t want to have any sort of obstruction from the actual inside space. We literally want to make you feel when you’re standing inside the social club, or standing inside the Members’ bar, that it’s seamless. You’re just viewing straight out onto the pitch.

Were there many complexities, or specific challenges? We’ve talked about some of the advantages of the glass but obviously it’s not just about clarity, you still need glass to be insulating acoustically and thermally in many instances. Why not just use plasterboard?

You can build essentially whatever you want but it will cost exponentially. We needed to work within the limitations of the product in this case, the way we structured the mullions and worked with the floor plates. We worked on that quite early on in the process to be able to get as much free-span glass as possible to meet the project’s budget.

What technical help did Viridian provide?

We worked closely with Viridian’s engineers in Melbourne to understand what really was the best way to conceive the glass and the best products they had available to meet the needs from a visual/light perspective. How much transmittance of light were we going to get but also to be able to see through the glass. We had reasonably large samples we could take to our client and show them. It’s tangible.

Any other key design drivers?

One of the key ones early on was a 5,000 sq.m department for the Geelong Cats downstairs underneath the stadium, not a lot of light can actually reach the office spaces directly underneath the actual tier itself. We located all of their common facilities – breakout facilities, the places where football staff can come and congregate – with a glass floor that has visual connection above. That’s great from a working and environmental perspective. That’s combined with planting and other internal items we’ve placed within the actual floor plate itself. On match day it also gives connectivity for the patrons because they look directly down and into the space.

Any benefits in sourcing a local product such as Viridian’s?

It gives architects a lot more confidence in what we’re going to see on site. It also allows quicker turn-around from a construction perspective. It also informs our clients so they know straight up what they’re getting. As well as working with the fabricators a local product certainly does help.

It was pretty monumental once we got the majority of the glass and eventually started lifting. It had been in fabrication for many months and we had gone through the original design and shop drawing phase. It is quite a monumental occasion when you see it come together exactly like the renders and how we conceived it. 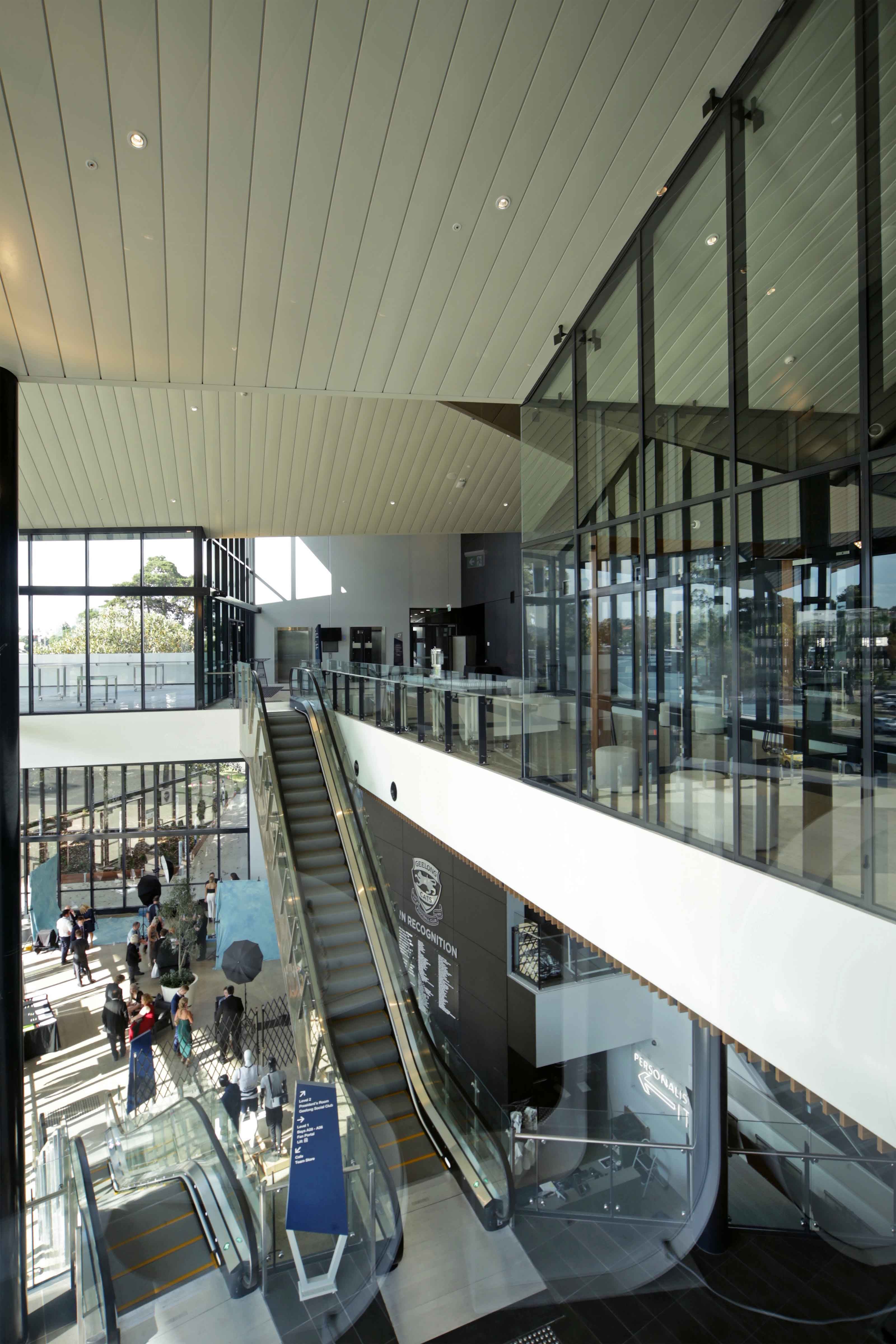 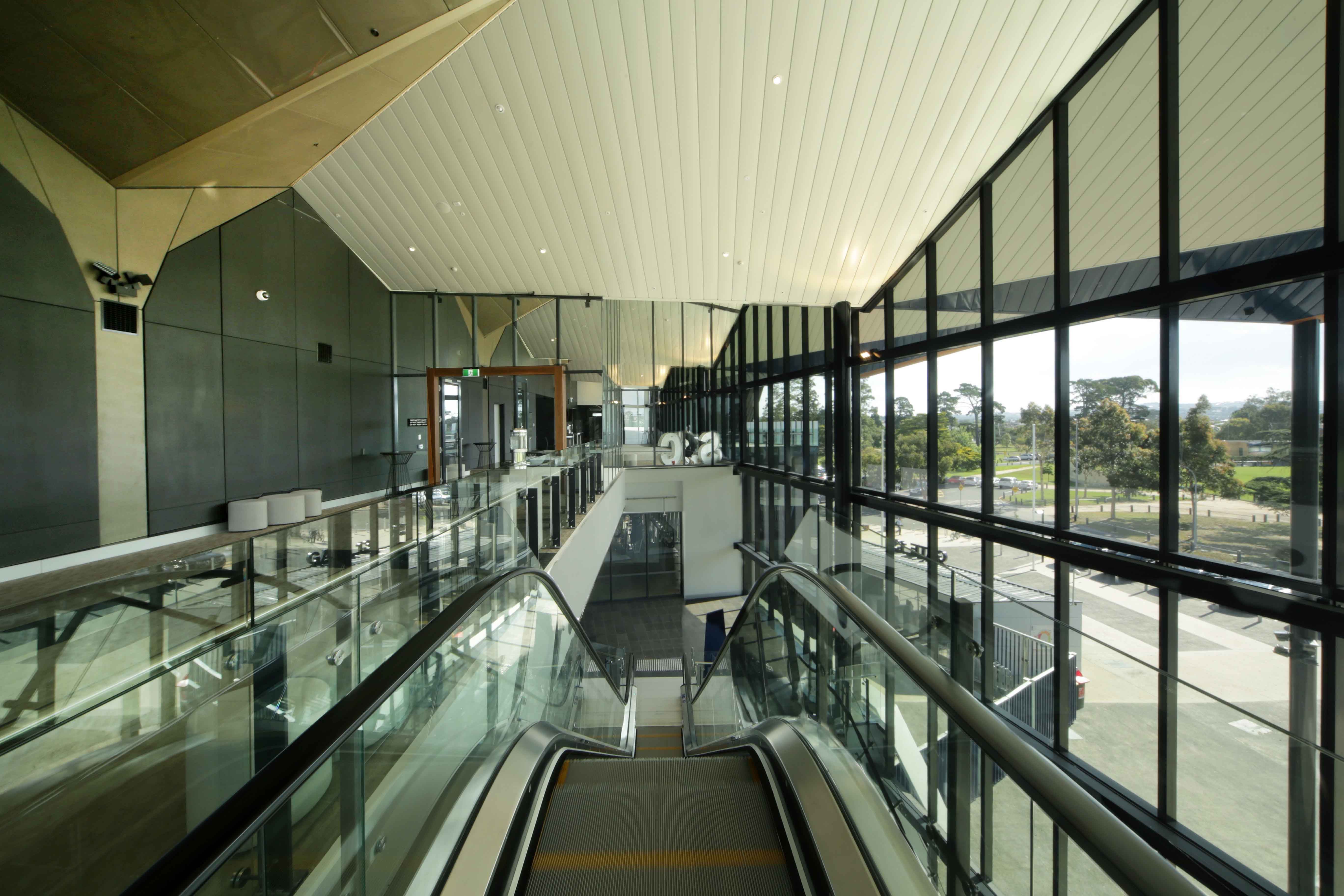 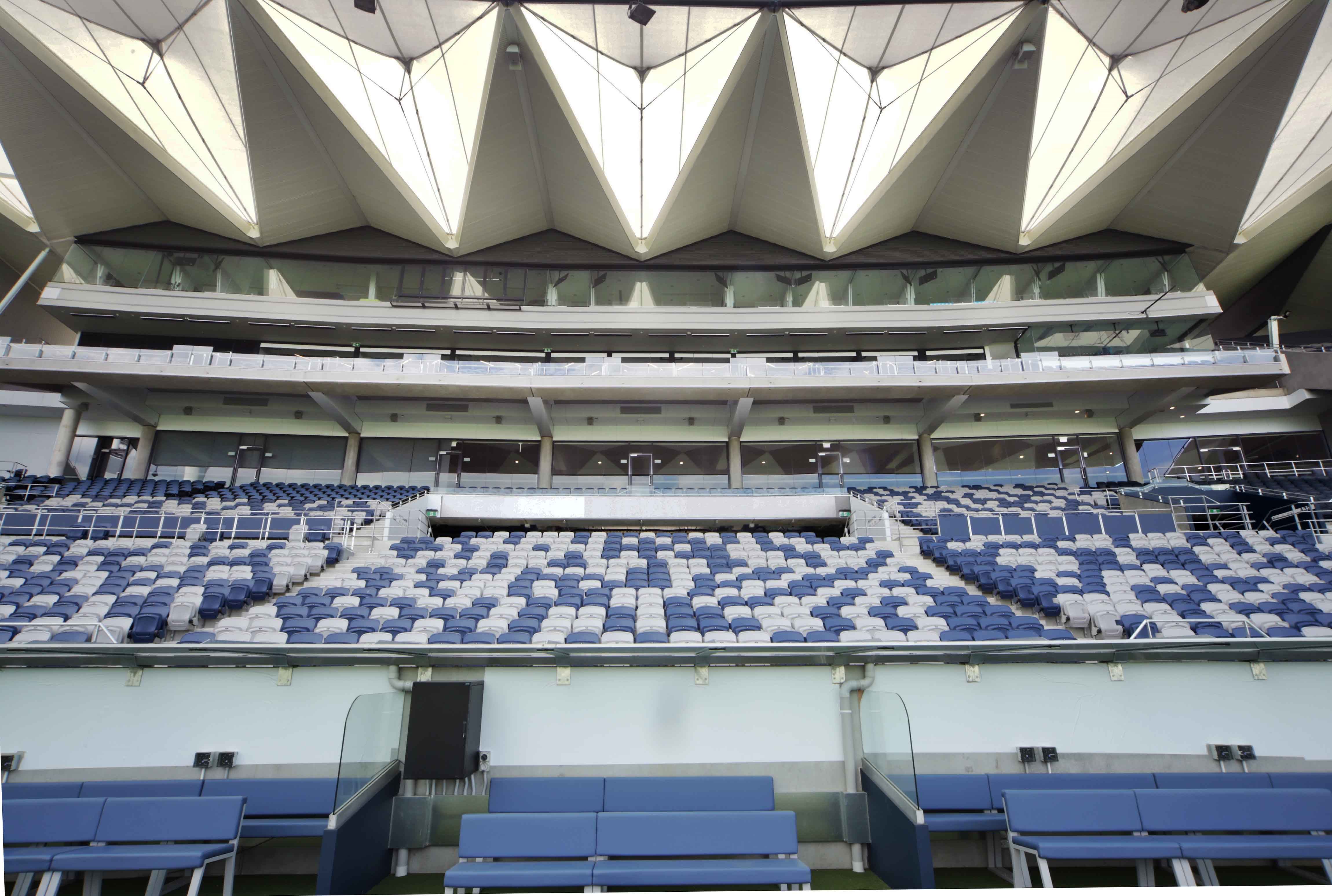 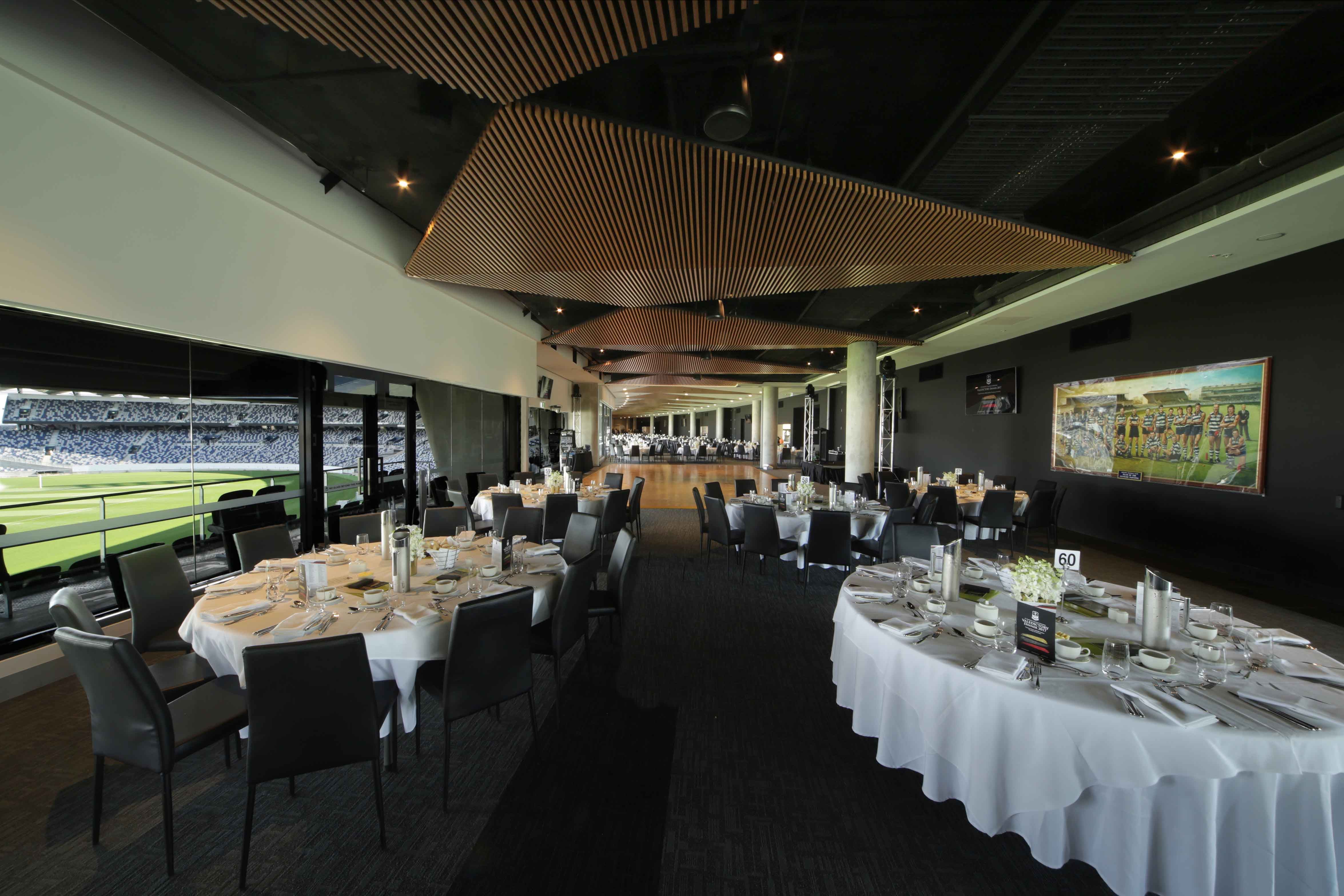 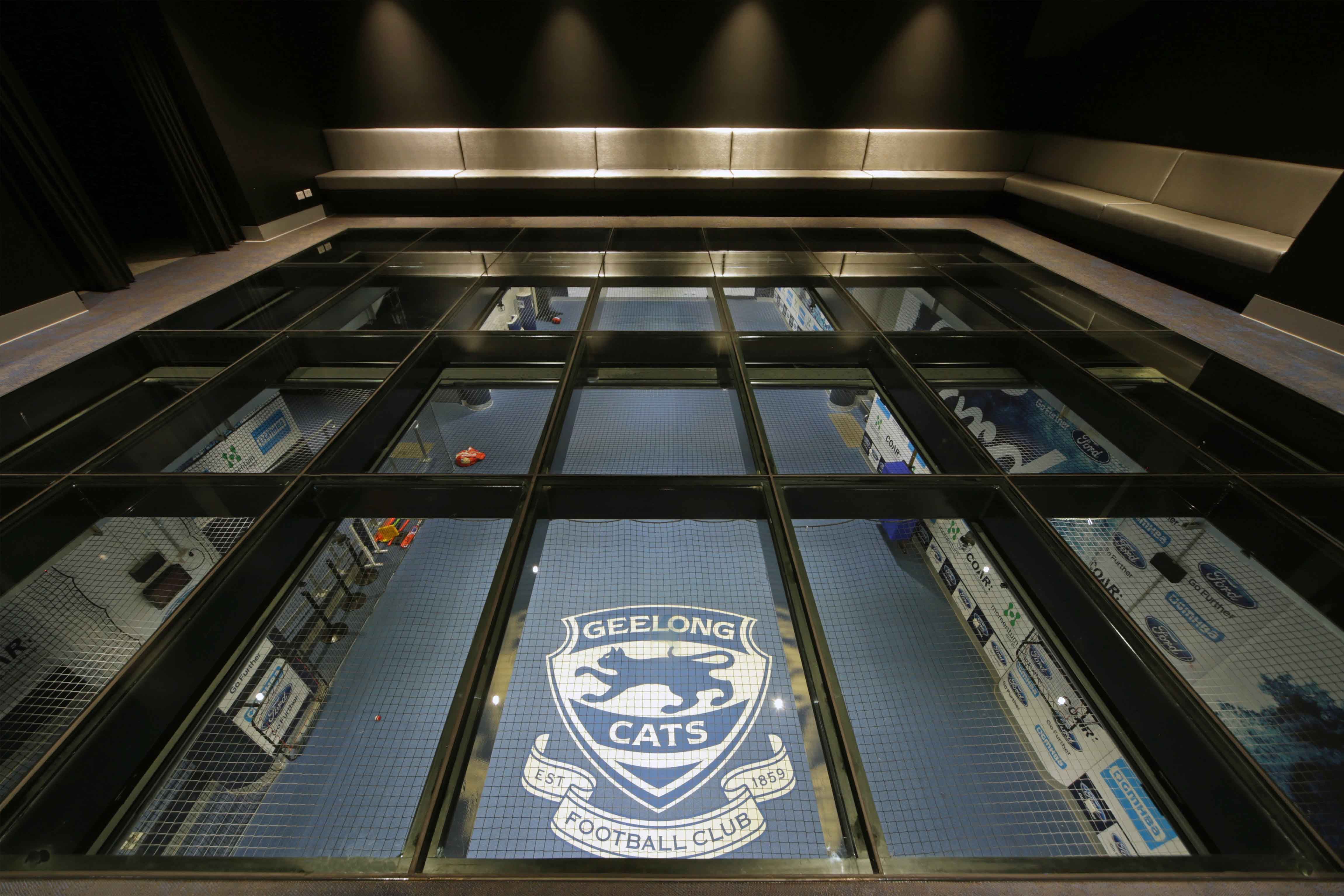 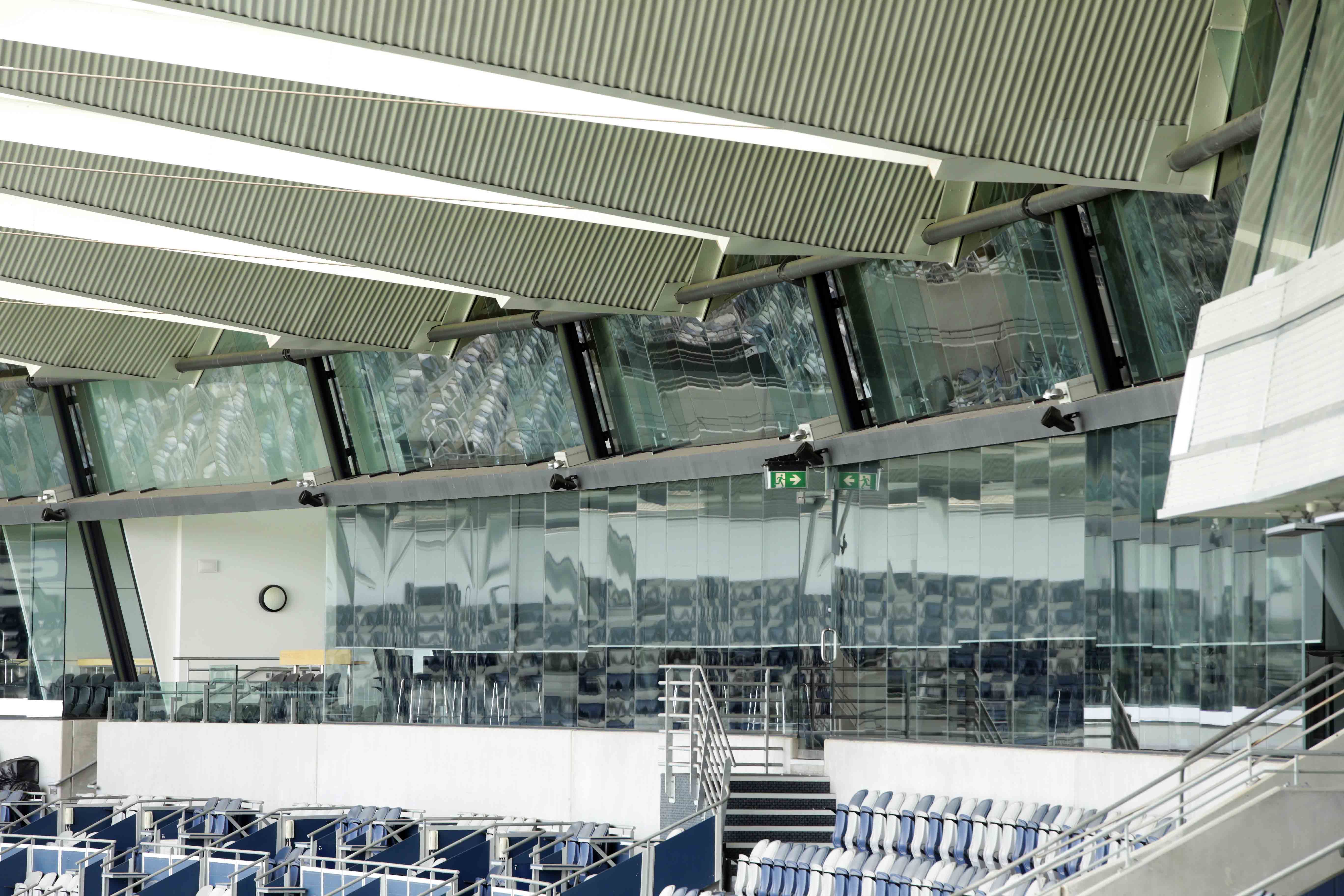 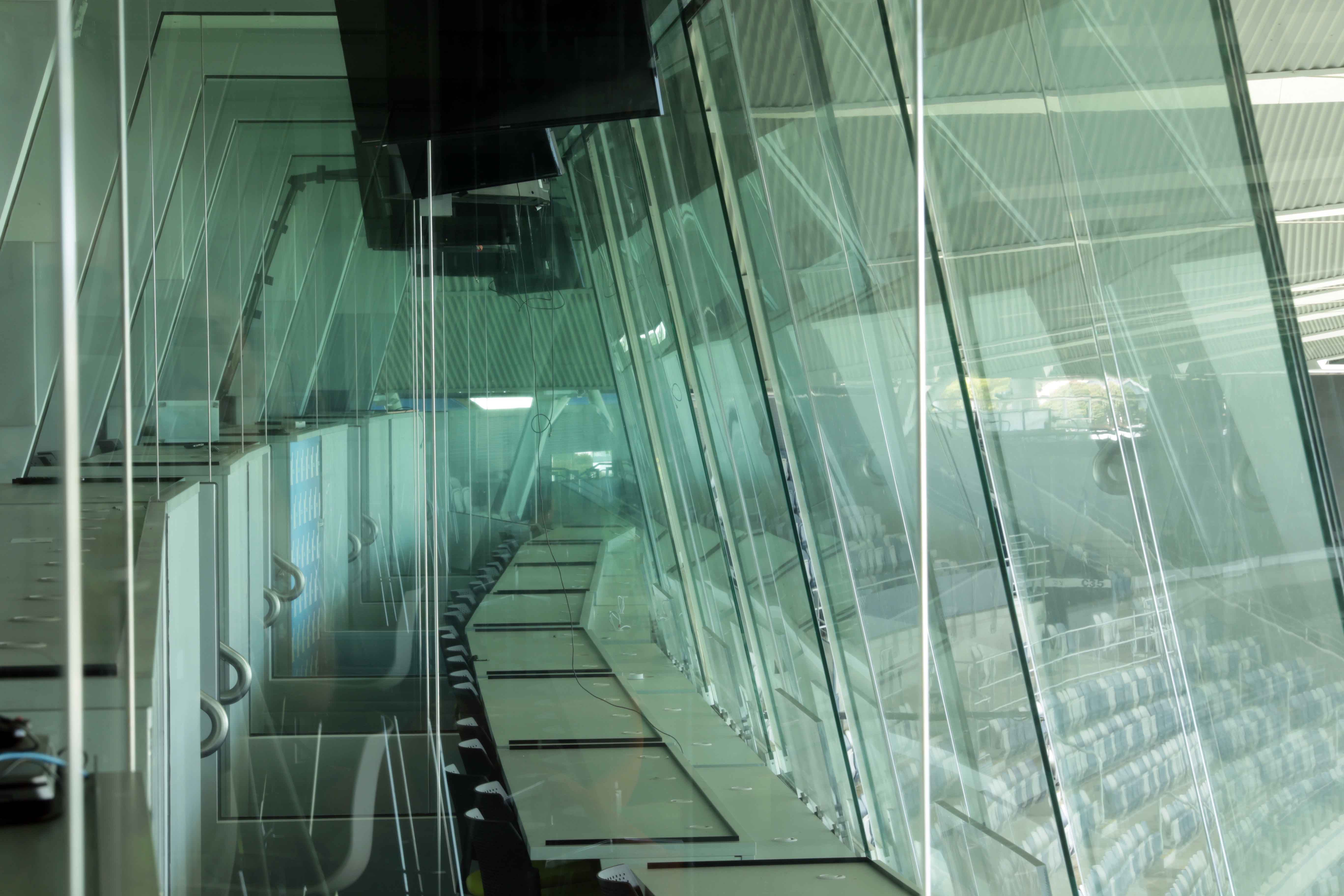 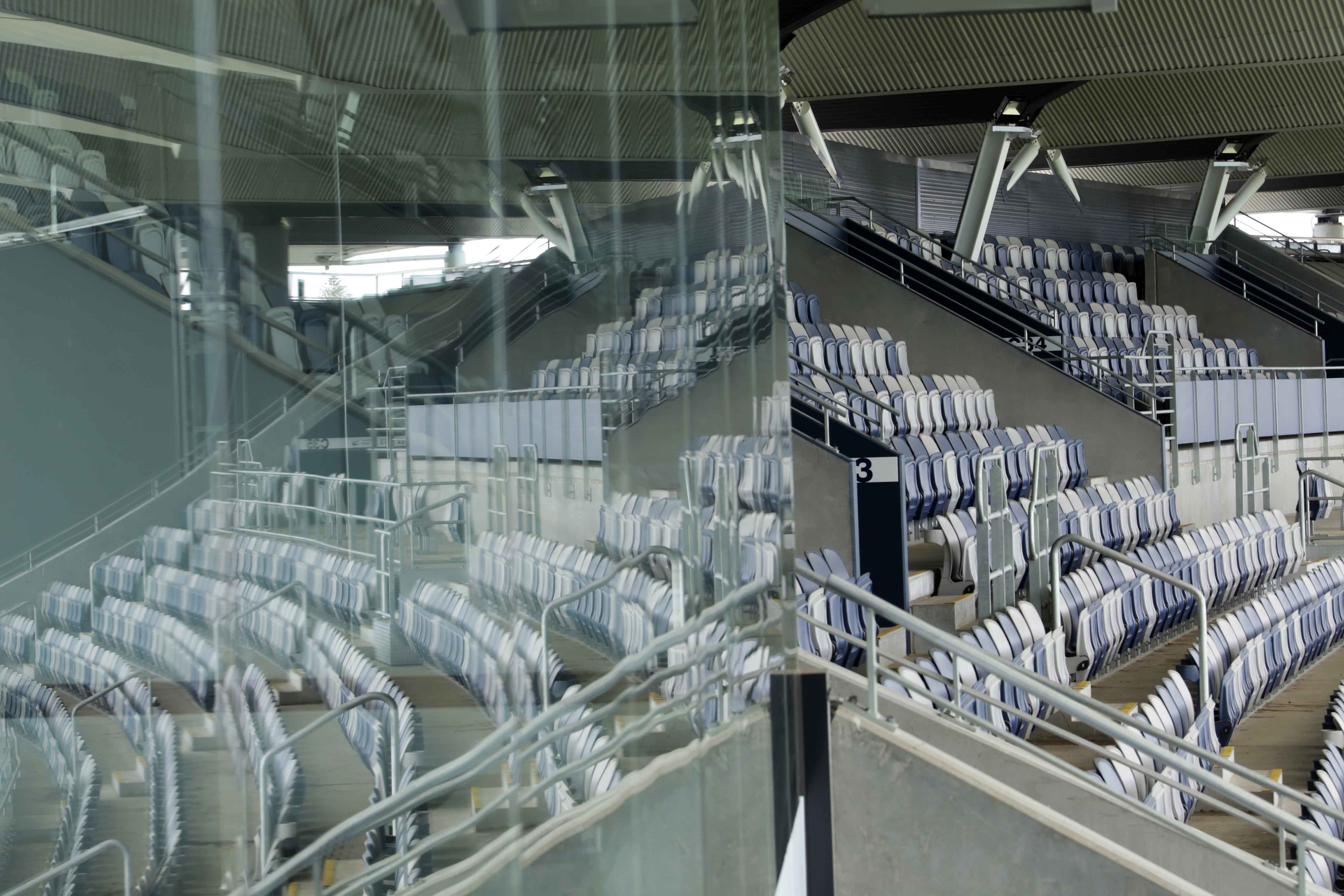 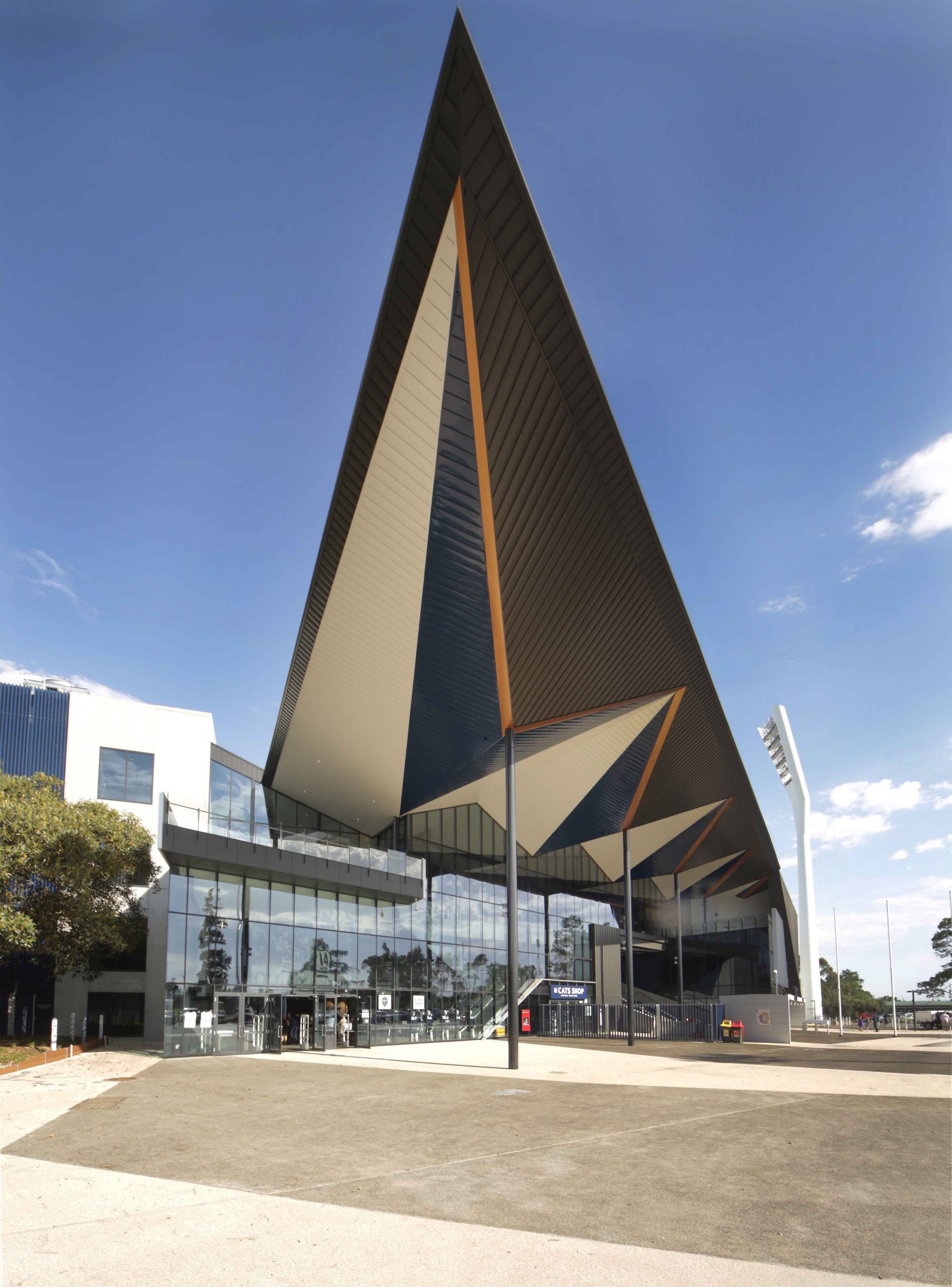 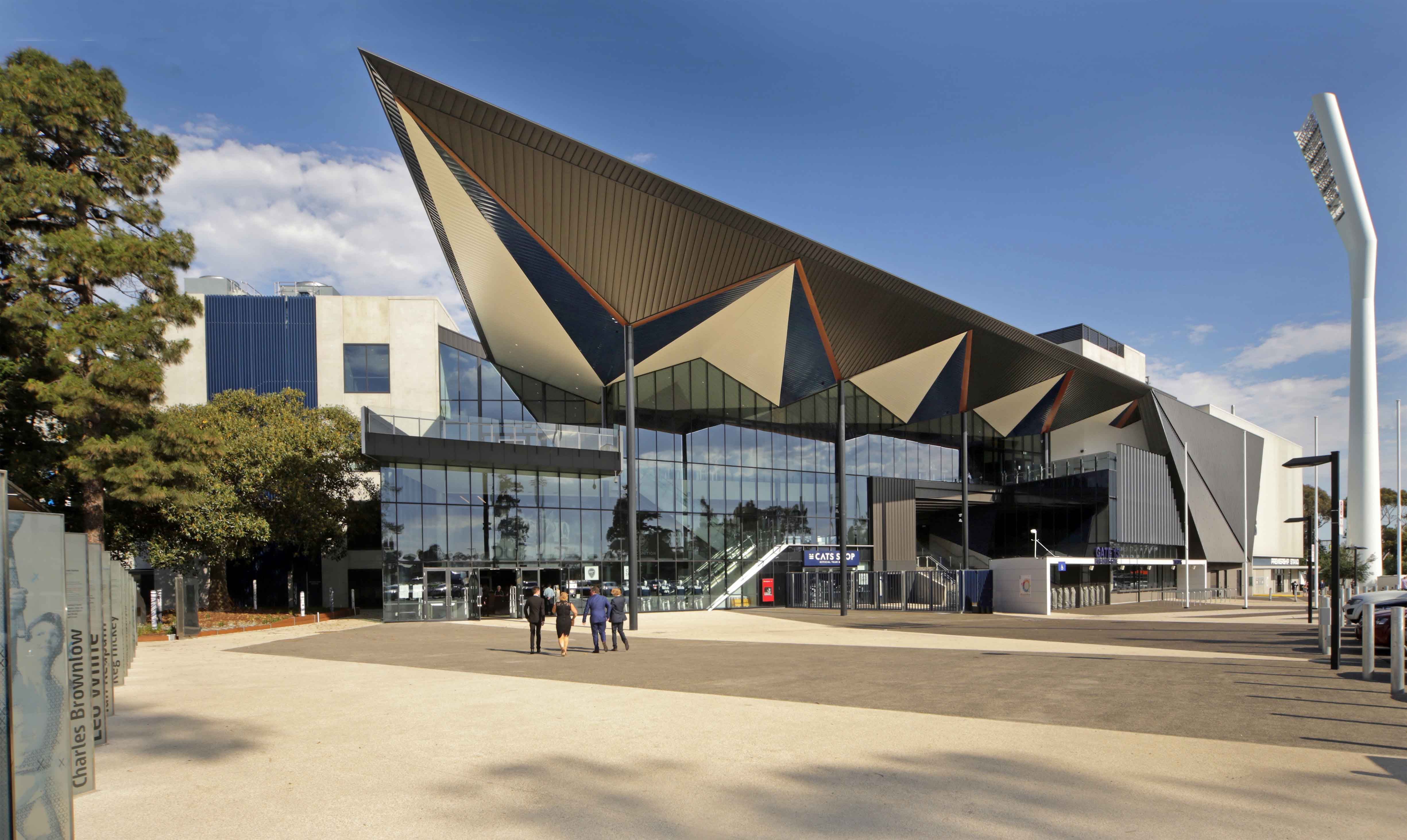 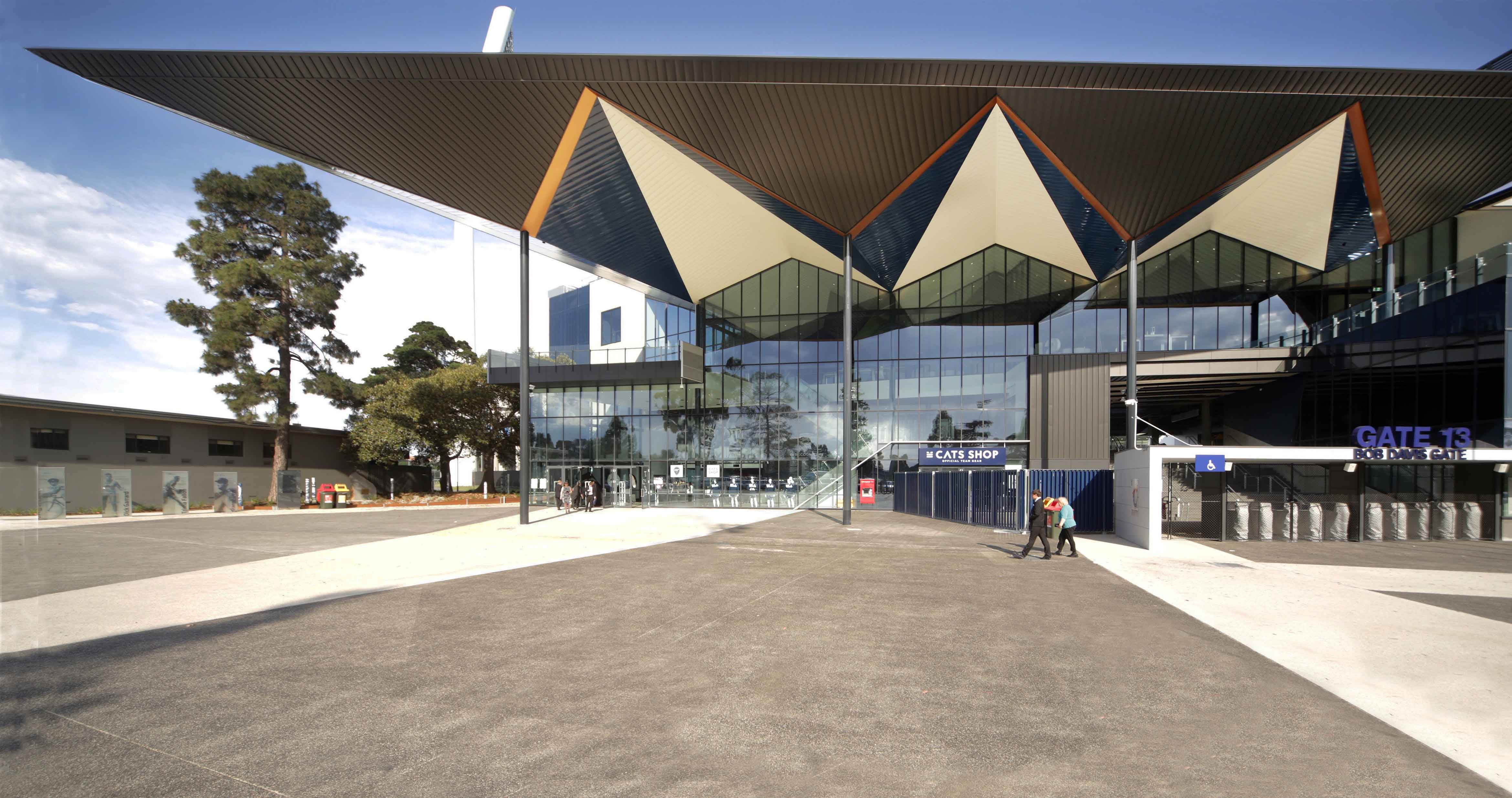 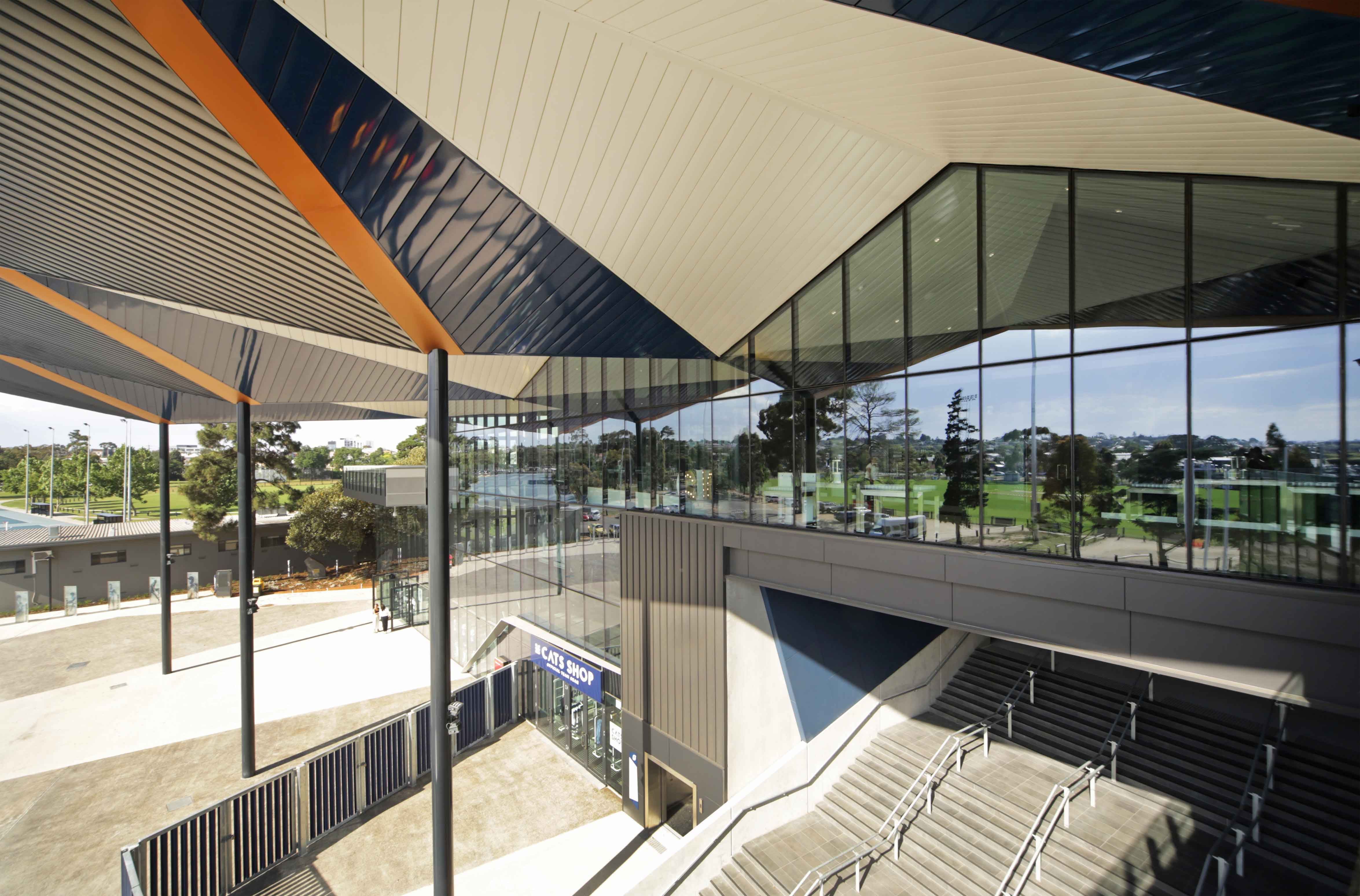 “We have the fan portal downstairs which is a glass floor of 45 sq.m. It overlooks the players’ warm up space. Being able to provide different experiences allows our clients to commercialise and monetise their buildings. That makes them obviously successful. ” Brayden Goodwin