Leading architect pays homage to light in his own personal masterpiece

When architect Craig Rossetti decided to take on the ultimate passion project of designing his own home, he set the bar high.

With modernism at the forefront, this home steers away from traditional design. By using unconventional methods for his inspiration including sketches of rubbish and the irregularities of nature – he created an awe-inspiring home.

“Modernism is a fantastic starting point. Then there’s everything around us that is probably the greater inspiration. This is a small house in a big world. It’s about the flow of spaces and a response to all of those influences that exist in the everyday and which you would try to translate efficiently,” Rosetti explained.

Elaborating on his theme of the unconventional and unique, the home’s central focus is around a distinct towering patterned glass wall which was built using Viridian Super Clear. Rosetti uses this as the predominant light source for the home, shaping the way the daylight enters the space.

“The feature window is really critical to the success of this house. I can’t imagine it without it and while there are plenty of other contributing elements in that hierarchy of special moments, that is probably the one that leads the way here,” he said. 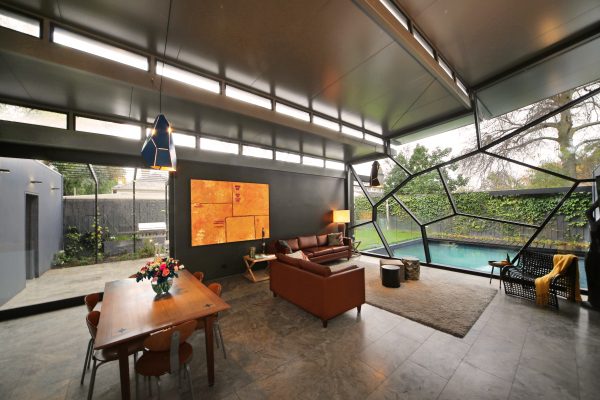 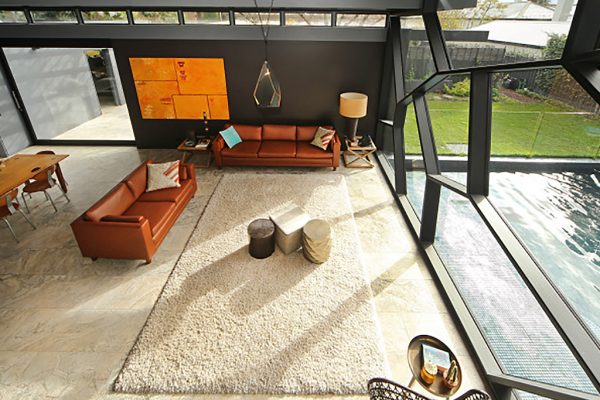 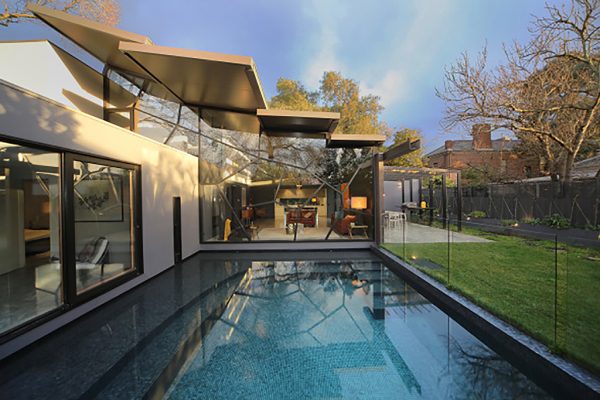 Creating a sense of anticipation was also important for Rosetti. He endeavoured to conceal the remarkable interiors by having the entrance to the house in an anonymous laneway, teasing guests of what’s to come. This allows the light filled spaces to be unveiled in sequence, maintaining the element of surprise.

“When you enter the front door, you enter a tight space and view a blank wall, rather than looking right through the other side of the block. You don’t want to give everything away right at the start,” he explained.

By playing with light and opting to leave negative spaces open, the focus is magically on the pool and garden. The light reflected off the feature window and pool opens out to most of the house, counter balancing the darker interior and decor.

“The pool is located to the north of the curtain wall so that you then get patterns bouncing off the water onto the interior walls and ceilings,” he said.

When it came to choosing the right glass for his project, Rosetti used clear glass, based on the fact that the design of this home relies solely on the transition between inside and out. With glass being the hero of this home it was important to use a classic glazing system that still held its own in a modern home.

“It’s leading the way with technology that isn’t always highly visible. This framing system had glass taped to the front for precise fit and then adjusted; it was just fantastic. It’s the classic glazing system but it still works like a champion.”

Shining a light on the most valuable home asset