Monash University’s Clayton campus is a story much less of student revolt than sustained evolution. Melbourne’s new population epicentre 25 kilometres to the CBD’s south-east, the 100 hectare paddock of diesel and dust, circa 1962 has been digested into the city’s sprawl, not as featureless ‘same old’ but cosmopolitan campus distinguished by tracts of stellar landscape and clusters of heady architecture.

Monash University’s four bold new halls of residence are an impressive investment in education here and now, rather than the virtual experience tethered via cyberspace.

Four design practices teamed to produce site-specific buildings right in the heart of campus—possibly to the surprise of some who view such real estate as the province of more strictly academic pursuits. Without any hint of competing ‘styles’, each practice contributes a convincing, compatible vision:

Hayball and Richard Middleton Architects (RMA), McBride Charles Ryan (MCR) and Jackson Clements Burrows Architects (JCBA) were given one building each (two for the joint Hayball and RMA team) and briefed to deliver common areas, landscaped spaces and residential areas all under the now familiar umbrella of a 5-Star Green Star rating.

An ensemble of Viridian Low-E  performance glazing stars in the delivery of these enlivened, distinguished designs full of light and life. Rather than inert skins, glass walls and windows-as-gills create a mellifluous environmental dialogue.

With more than 20,000 students on this single campus alone, the university shows no signs of relaxing its ambition to perform as a global player. And here inclusiveness, rather than the cellular silo variety rules.

At first glance it might appear old-fashioned to create student housing in the Age of the Internet and on-line education and yet this counter-intuitive approach has been quickly adopted. As a substantial bonus, on-site living promises a livelier learning environment than blistering download speeds. This cultural attitude to align learning with living is central to a long-term strategy above and beyond cyberspace. In a relative eye-blink Monash University can now accommodate an additional 1,000 students on campus.

Successive Vice-Chancellors with an interest in the natural and built environment have contributed to the dynamic, uplifting and contemplative. Student housing is a newer chapter and an imperative commercial consideration in the age of shrinking government funding.

The university’s four newly-minted halls of residence – Turner, Holman, Logan and Campbell – testify to the power of architecture as stylish flagship rather than inflated folly. And rather than the austere, discounted and side-lined types across general residential developments, these are centrally located – right in the heart of campus.

Their location improves relevance and design that deftly handles the potentially conflicting needs of privacy and connection – achieved with clever footprints, spatial flow as way-finding and strategic universal/communal spaces.

It’s no coincidence that Monash University drew on the expertise of its Faculty of Art, Design and Architecture in developing the halls of residence competition process. The benefits of their input from conception to completion are apparent throughout. Faculty Dean, Prof. Shane Murray advises the university’s Estates Committee on consultant selection and together with invited external senior architects and the university senior management, designs were reviewed throughout their development. He cites Monash as the city’s leader in campus living with these new halls of residence. He was also determined that the results would set new benchmarks for housing students who in turn will activate the campus much more fully than the usual tidal flow of students. Prof.Murray says the result of these residential buildings is as animated ‘contributors’ to their settings. “A couple of these projects are really in the epicentre of the university and fully part of the operation of the campus. There’s a type of fluidity between the life of learning and living and there is seamless interconnection. That works both for the residents and most importantly it enriches the life of everyone on the campus which is the other great benefit of living in a more integrated way.”

“These buildings are obviously residential colleges and the most important thing about a student residence is that you have a lot of windows. It’s their most enduring characteristic and these buildings are a fantastic catalogue of different approaches to glazing in building.

“Monash has a very deep commitment to sustainability. The combination of very high performance solar glass with large expanses of glazing relative to environmental constraints is challenging. Combining different approaches to the proportion of the glazing and the way the skin of the building and other solar treatments shield the glass, particularly when facing east or west, has been a key element in animating these buildings Repeated glazing elements are a fundamental characteristic of student residences; they are collections of little dwellings and glass is the connection of each dwelling to the world and it’s very important to get that right.”

These projects cater for some 1,000 new students-in-residence and are centrally sited – alongside sports fields and established leafy avenues for instance – rather than marginalised to the edge of campus or worse, off campus altogether. The whole project mounts a brilliant case for architecture allowed to perform at its budgetary best rather than value-managed and finally discounted into oblivion.

Glass rather than pre-cast, provides crucial legibility and amenity for all buildings in addition to highlighting circulation zones from staircases through to shared social spaces and studio apartments.

The use by each practice of Viridian performance glass expresses and translates designs that comply with the university’s preference for locally sourced and manufactured materials to more authentically demonstrate origin as key within the sustainability chain.

Jackson Clements Burrows’ five storey ‘Turner Hall’ offers elegance and exuberance with technicolour window fenestration. A cranked plan to its slender, linear form helps eliminate deep, daylight deprived floor-plates. Generous glazing throughout goes well beyond symbolism or gesture to ensure multiple apertures for a response not merely to light, but views to playing fields to the south and north towards a blend of verdant new and old landscape.

McBride Charles Ryan’s (MCR) Logan Hall is an eight-storey precast structure that wraps with the suns orientation on its east-north elevation and a monochromatic L-shape plan to the south-west with a distinctively rhythmic window geometry. MCR’s fixed shading, high performance glazing, thermal mass and insulation contribute to a design highly-tuned to its assorted elevations – most notably the leafy avenue known as Sports Walk and its fritted billboard wall to the east. Partially hooded glazing and glass on the east elevation present interactive billboards of hyper-art.

Hayball and Richard Middleton Architects’, six storey ‘Holman Hall’ and ‘Campbell Hall’ alternate between opening boldly to the south and of necessity, a more conservative counterpoint to the north and west. Internal and external glazing is nuanced to better bridge the adjacent elysian fields and tree-lined canopy with living zones. Working in association, Hayball and Middleton refer to circulation ‘knuckles’ where students filter, gather or pass throughout their buildings with such a highly integrated subtext.

All practices demonstrate the value of what might be termed ‘democratic design’. Students separated from family and friends, often by great distance, now have every opportunity to fully assimilate with university life.

The image of the disconnected, soulless ‘dorm’ is nowhere to be seen at Monash. Life, light and colour all contribute to completion of the missing link of the university’s more than half century of achievement. Finally students have a place to call home. Right where it matters – in the heart of campus.

“We wanted sufficient transparency to accentuate the colour selection of our interiors because these buildings aren't only utilised by day. ” Hayball and Richards Middleton, Architect

The form of these buildings is influenced by environmental practice to manage solar gain and encourage natural light. Small variations in the panel shapes of the facades help refract light for delicate surface embellishment. A coloured ‘hood’ window of each studio glows of an evening.

This pair of six-storey L-shaped pavilions interconnect via a pedestrian thoroughfare and spill out onto adjacent community parkland to the north, and Sports Walk Avenue on the south.

It's a project that reflects a collegiate atmosphere between all of the architectural practices. As a group we didn't want to simply produce a cookie-cutter version of four buildings, and the client, through the tender process, had a clear preference to involve four practices rather than receive a single language across all the buildings.

It was not simply a matter of arriving at a unique character for each building. Each of the four projects is notable in their treatment, emphasis and scale of communal spaces such as lobbies and halls. We created ‘the knuckles’ of each building where the two wings join and fly off from the entry node. This forms its ‘knuckle’. We decided to accentuate this area to really create a greater sense of inclusion and community. Entry to our halls involves use of the open staircase that accesses all the communal spaces; kitchens, study spaces and games rooms. Occupants can’t arrive at their apartment without passing these community spaces.

Pre-cast concrete panels work hard to create occupant privacy and shade to protect the glass. This helps permit the use of the clearest, most transparent glass possible. We wanted sufficient transparency to accentuate the colour selection of our interiors because these buildings aren't only utilised by day. Evening occupancy meant transparency is vital and allows colour to read through that façade and signify the various communal spaces available.

Glass is also vital as a marker upon entry. Our coloured frit pattern forms the entry to Holman Hall and creates transparency by day and night.

Due to the university slow-down over the high summer months, the design of these buildings could afford to take a much more seasonal, year-round approach. All of the new halls are naturally ventilated and use a combination of performance glazing, shading and passive ventilation systems. 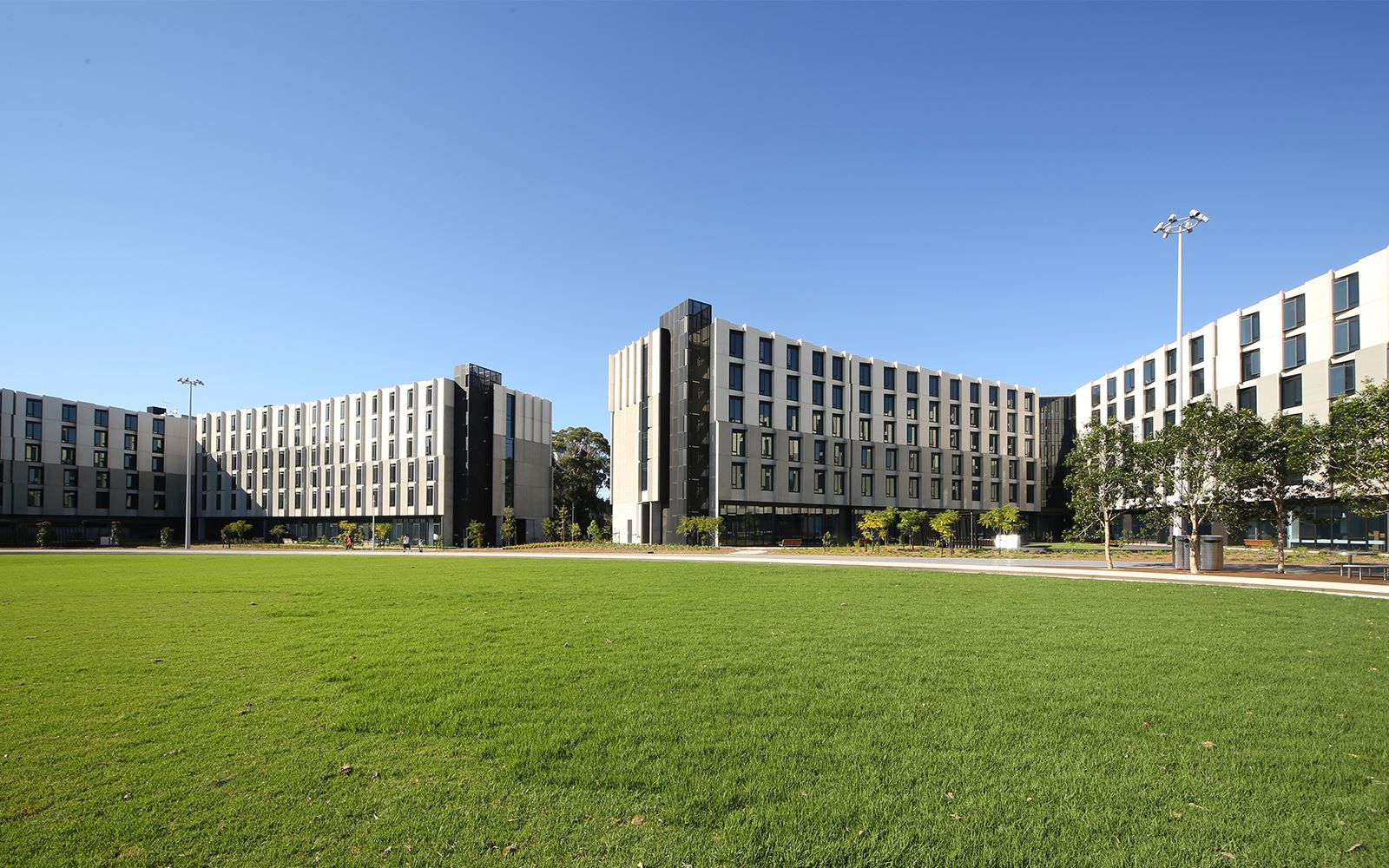 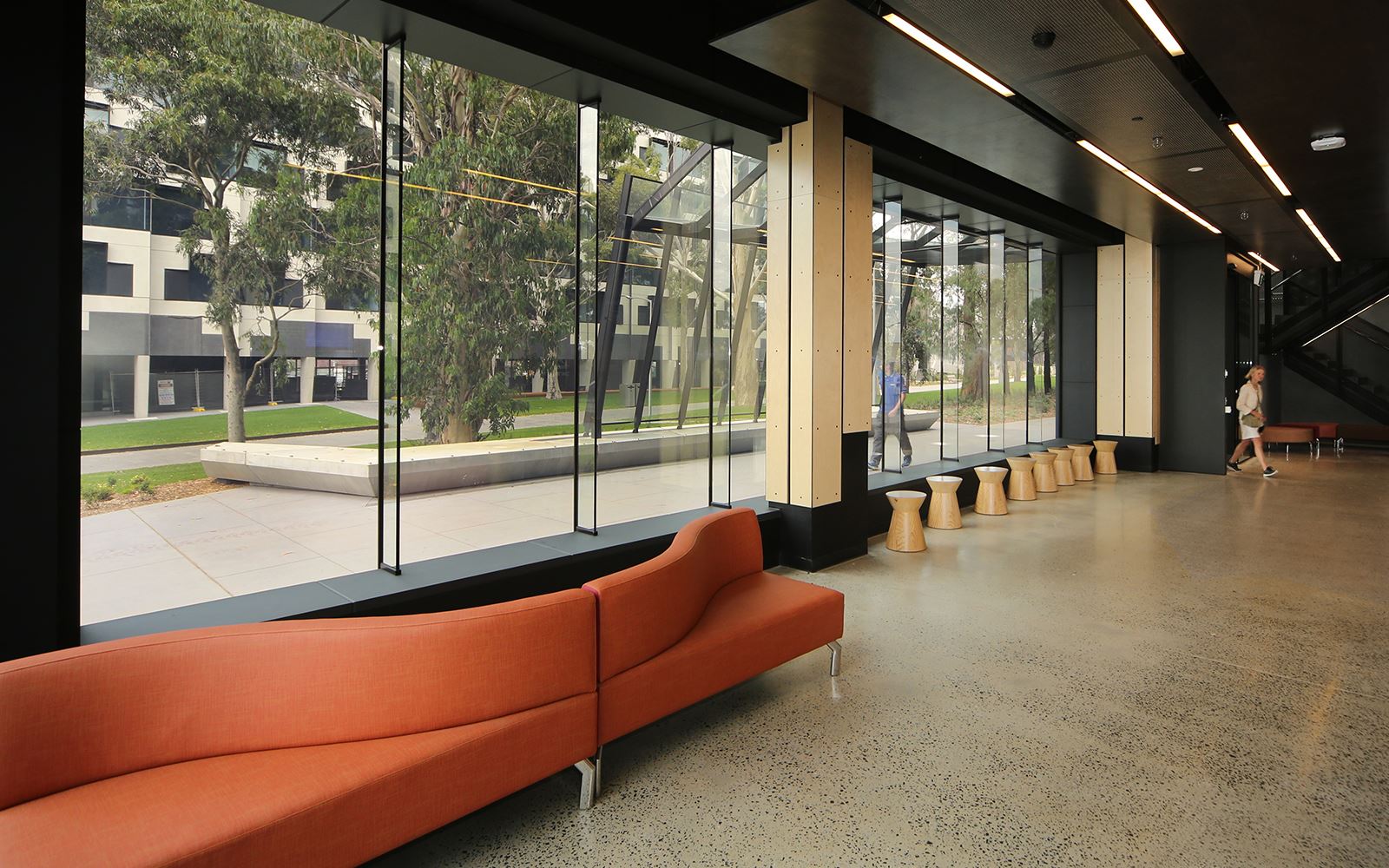 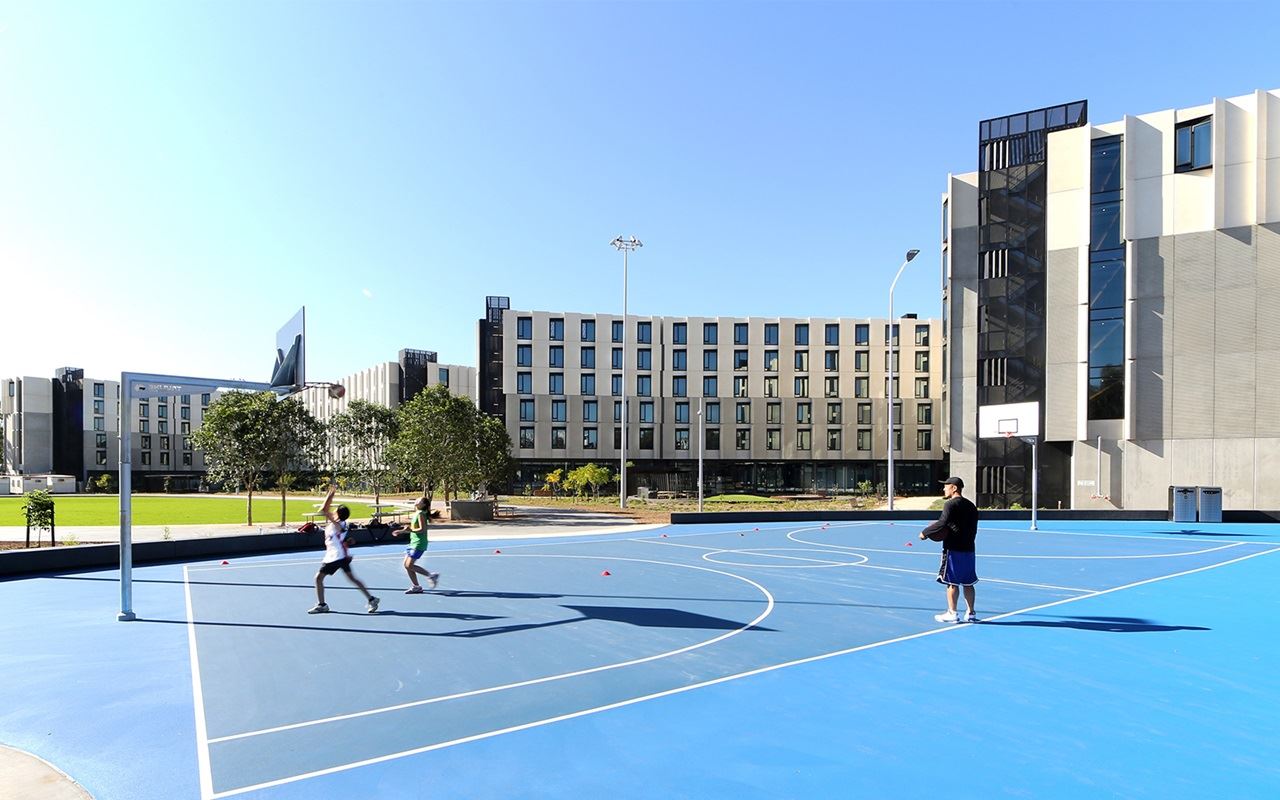 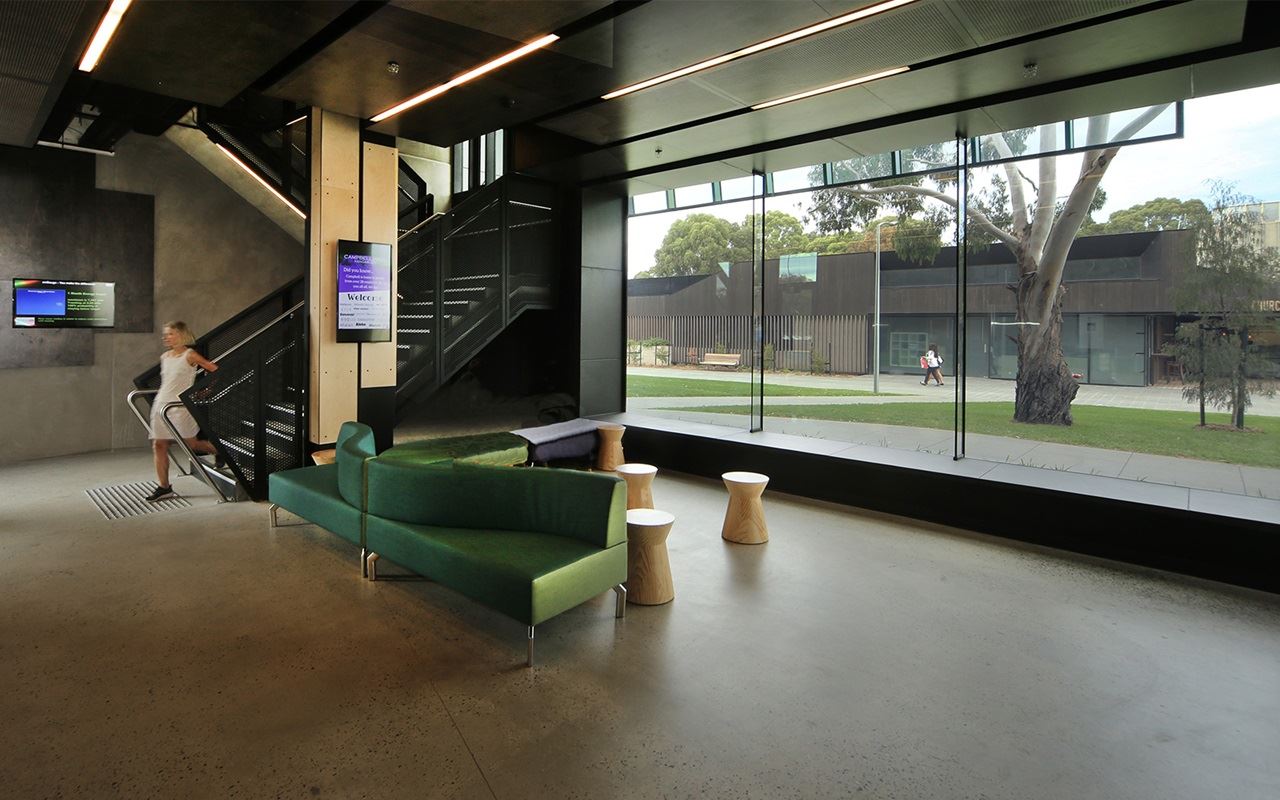 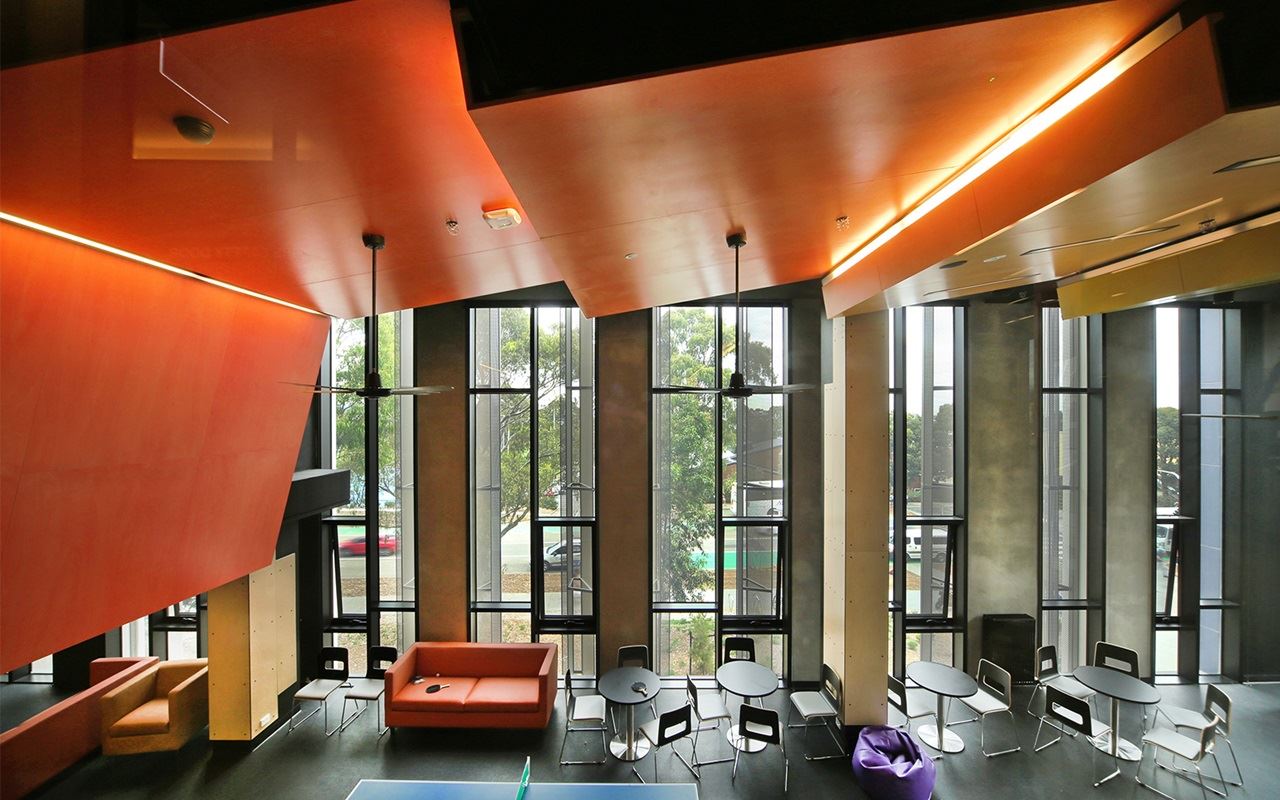 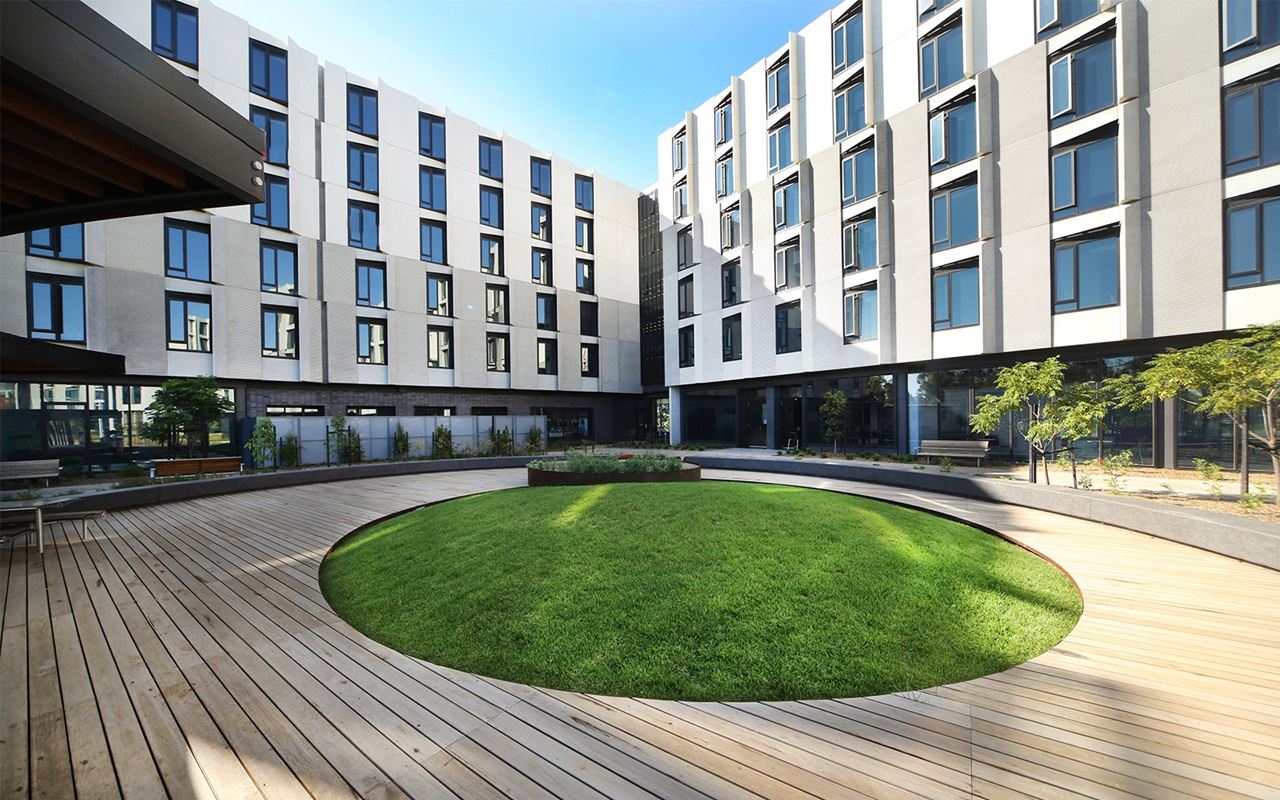 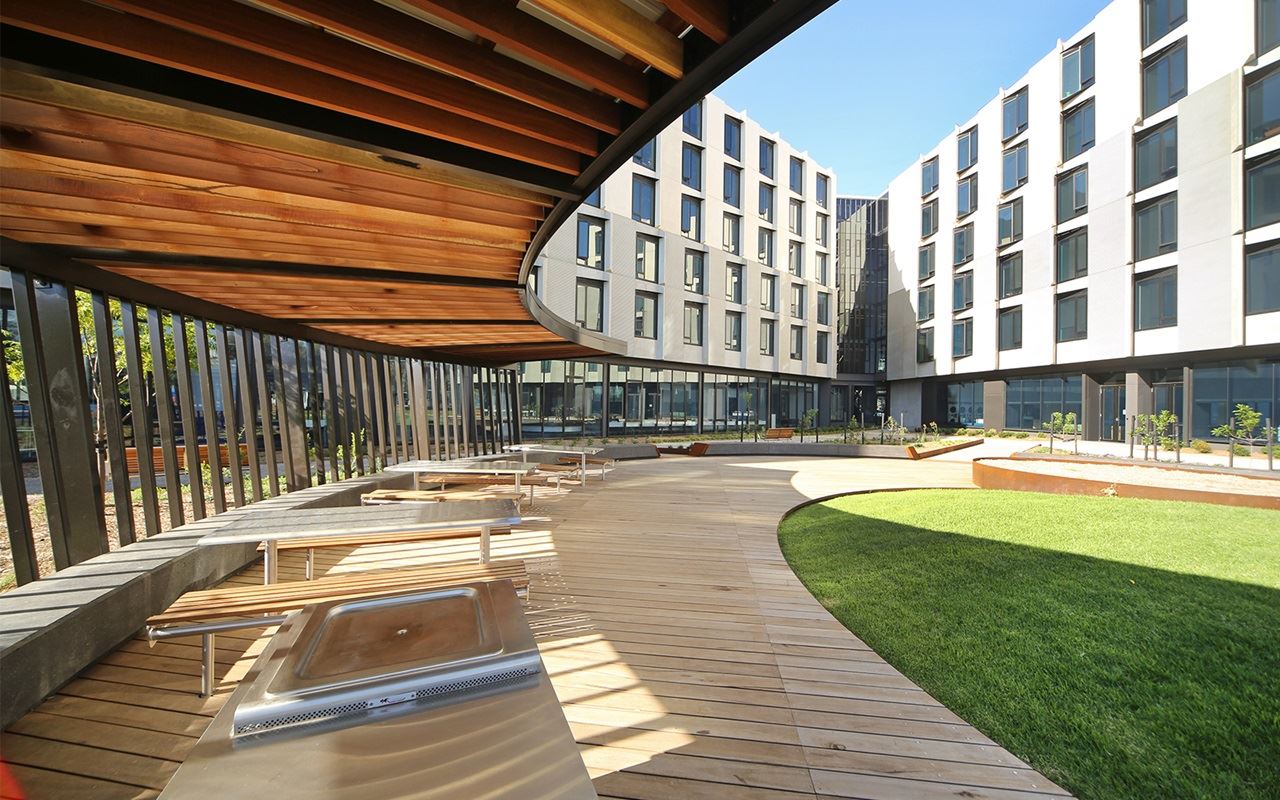 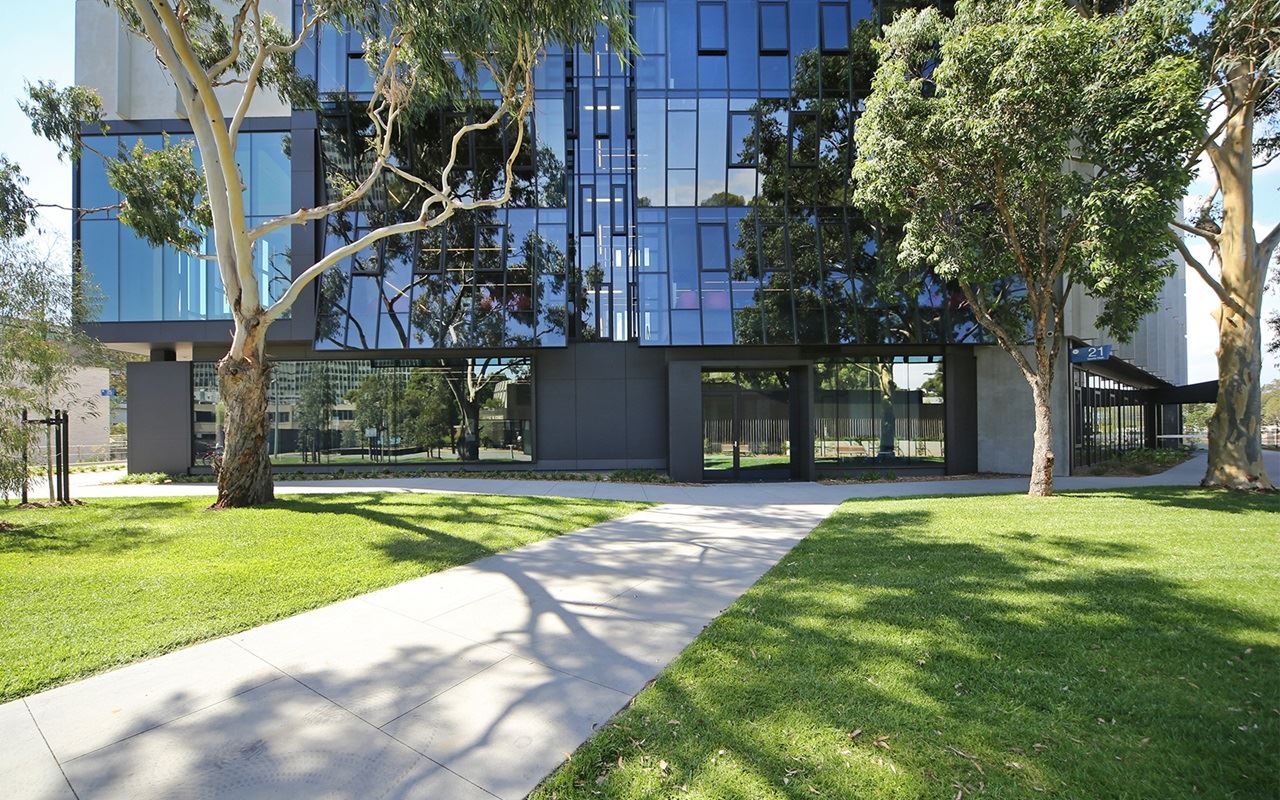 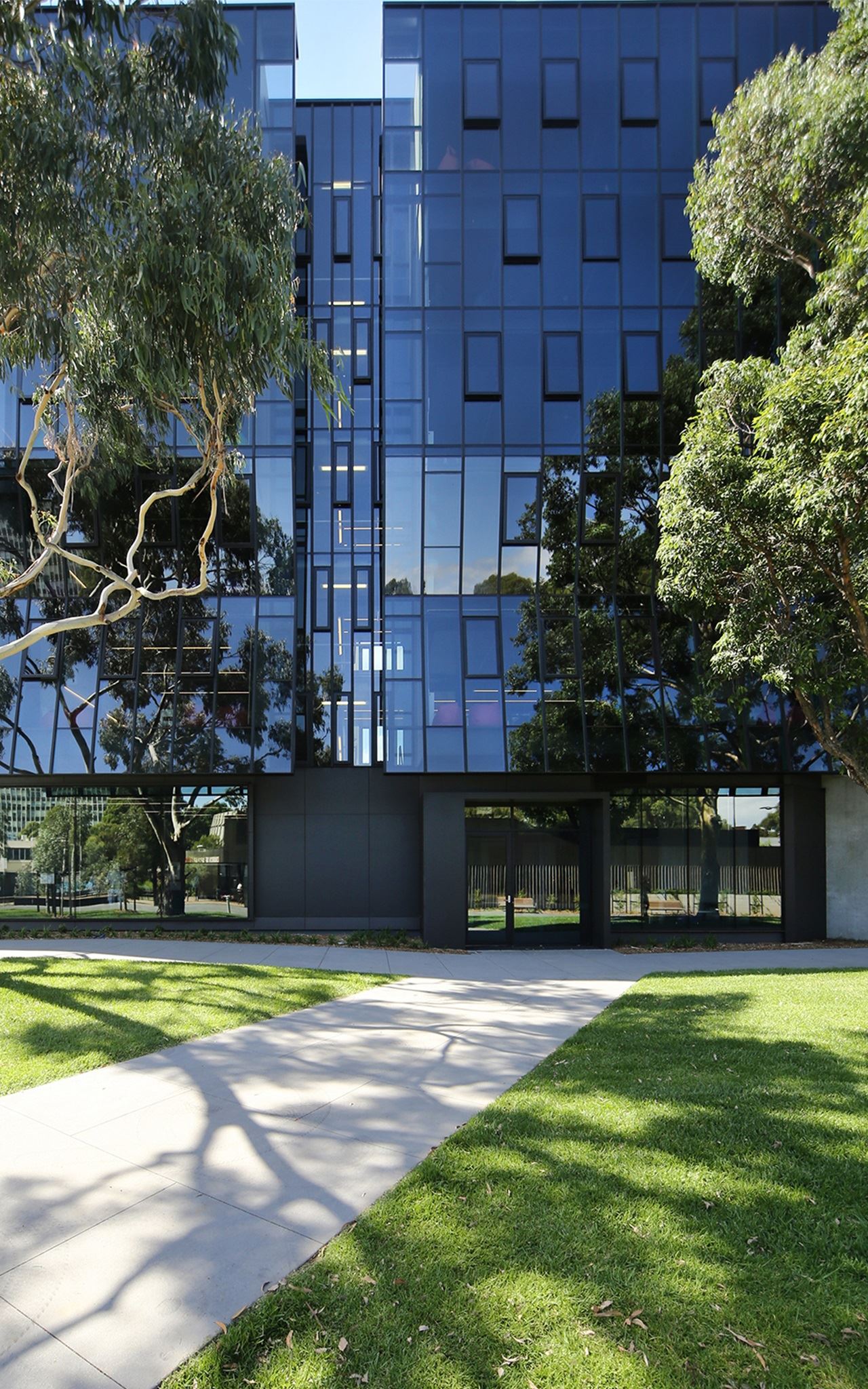