Thunderstruck by glasswork of art!

This public art exhibition has an epic story! PixaGraphic ™ was used to bring this visionary public art installation to life.

Domain Hill Property Group recently developed art inspired office spaces in Melbourne. This Abbotsford space is where you see the use of PixaGraphic™ in a music history inspired artwork, adding an interesting burst of colour through the internal space as well as adding an exciting element to external façade

The image is a tribute to Malcolm Young, one of the founders of Australian rock band AC/DC. The electric guitar and singlet are tributes to Young, and the sewing machine is significant because the name of the band was reported to be inspired by the reference to AC/DC on the power cord of the sewing machine owned by Malcolm’s sister, Margaret (Margaret also used the machine to make some of the bands’ costumes!).

The artwork was workshopped by the PixaGraphic™ design team to ensure the resolution would translate on to the printed glass panels. The panels were then expertly installed by the team at Audsley Windows. 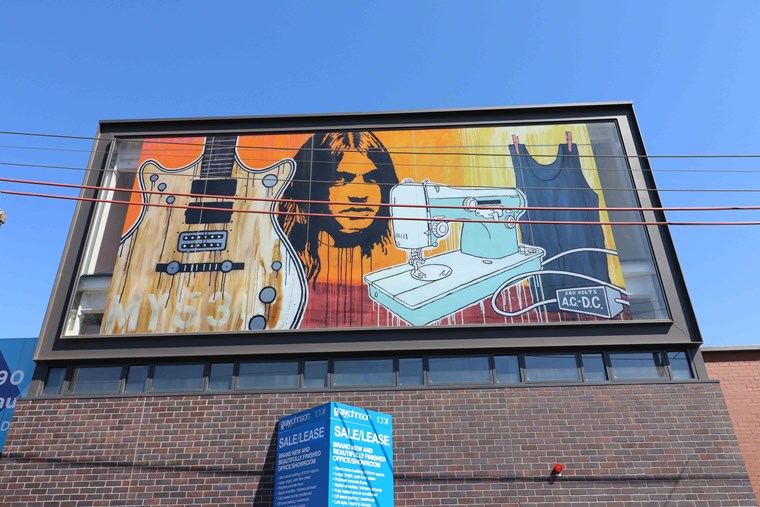 The image was printed on to 15mm Viridian SuperClear™ glass, which has been toughened and heat soaked for safety, high clarity and structural integrity.

We just had to share this one! We love the result. The image is impressive, and the PixaGraphic™ print technology adds a level of transparency which only glass can create.

If you want to find out more about PixaGraphic™ for your next project, read more here or contact the team direct via email.